If you're confused about banana spiders, you're not alone. Turns out that there are at least 5 types of spiders commonly called banana spiders depending upon where you live. Here's what you need to know about range and venom levels. 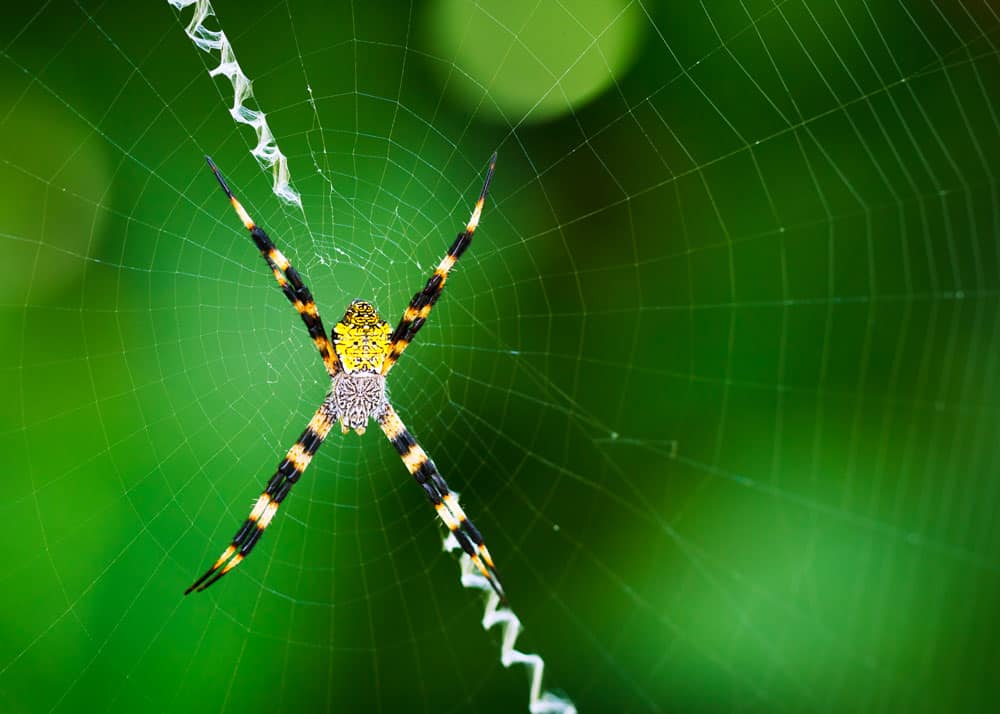 Guide to Banana Spiders (All Types)

To help clear the confusion, let’s dive into the following banana spider facts.

What does a golden silk orb-weaver banana spider look like? These spiders feature cylindrical bodies. Females are much larger than the mostly brown males and have yellow and white abdomens and long, skinny legs that are striped with yellow and brown bands. 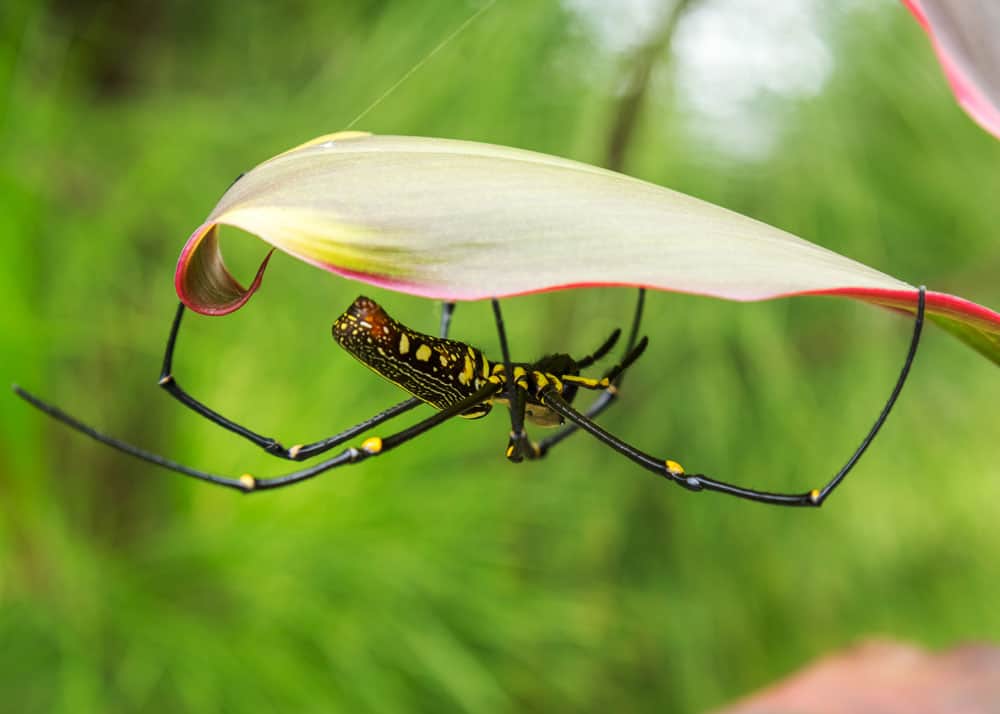 Chances are if you live in a warm region of the world, you’ve seen one of these golden silk orb-weavers that are often called banana spiders as well as various other names.

Much larger than their brown male counterparts, the females are the most striking because of the coloring on their bodies and long, slender legs.

Most likely, it’s the webs of these spiders that catch your attention because they’re often quite large with intricate designs. If you’ve ever accidentally walked into one, you know how strong they are because they’re hard to get off your face. Did you know these spiders can even adjust the hue of their webs according to the local sunlight conditions in order to catch prey by surprise? How’s that for some pretty cool banana spider facts?

Nephila spiders usually won’t bite you unless you poke at them and threaten them. Their bites may sting and cause redness, but their venom is mild and not harmful to healthy humans.

What does a Cupiennius banana spider look like? Spiders of the Cupiennius genus are usually large with brown, furry bodies and long, skinny legs. Some species of this genus are distinguished from other similar spiders by the bright red hairs on their mouthparts.

Native to Central and South America, Cupiennius is a genus of spiders broadly called banana spiders because bananas are the plants on which these spiders are most often found.

It’s quite common for workers in other countries to discover these spiders in imported banana shipments. Cupiennius are also called hunting spiders or huntsman spiders because they hunt their prey instead of spinning webs.

There are eleven species of the Cupiennius banana spider. In brackets is their known range.

If you don’t know your spider types, you might freak out, mistaking one of these for the more venomous spider, the Phoneutria (Brazilian wandering spider). The two look similar, but you can distinguish the Cupiennius by its bright red mouthparts. Some species of Cupiennius spiders are large and scary-looking, but they’re only mildly venomous. The effect of their venom to a human is comparable to that of a bee sting.

What does a Hawaiian garden banana spider look like?Males are small and brown. The much larger females are yellow and black with a body shaped like a king’s crown. 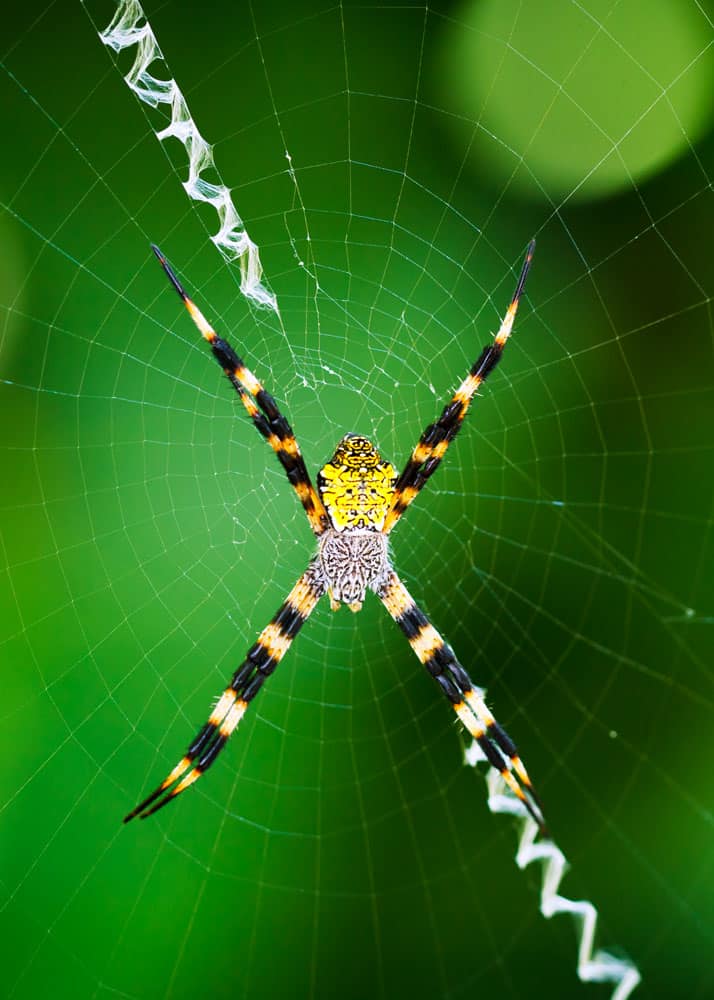 If you don’t live on any of the islands of the Pacific Ocean, you probably won’t see a Hawaiian garden spider because that’s where they call home.

At first glance, you might think this spider looks the same as one of the Nephila orb-weaver spiders because the females have similar black and yellow stripes. Take a second look, and you’ll notice that their bodies are not cylindrical like the Nephila but have the shape of a king’s crown.

Another way to tell the Hawaiian garden spider from other orb-weaver spider types is by their webs. These spiders know how to make their webs durable by weaving them with a distinctive zig-zag design.

Hawaiian garden spiders are not harmful to you unless you’re a bug. If you spot one in your garden, you should let it alone because they prey upon insects that eat plants and flowers.

What does a Trichonephila clavipes banana spider look like? These spiders are similar to the black and yellow Nephila but have longer, darker and less yellow bodies. Officially regrouped within the Trichonephila genus, this silk orb-weaver was previously classified as a Nephila species. That’s no wonder since it looks similar to the black and yellow Nephila. Upon careful observation, you’ll see that this species features a longer body that is also darker in color with less yellow. It’s also known for the clumps of dark hair on its legs which are common among its genus.

Trichonephila clavipes live in the range from southeastern USA throughout Central America and all the way to Argentina in South America, but they can also be found as far north as Eastern Canada in the summer.

Although this spider may look threatening, it is not aggressive. It will only bite if it’s handled roughly, and its venom is harmless to humans, causing only slight redness to the bite area. 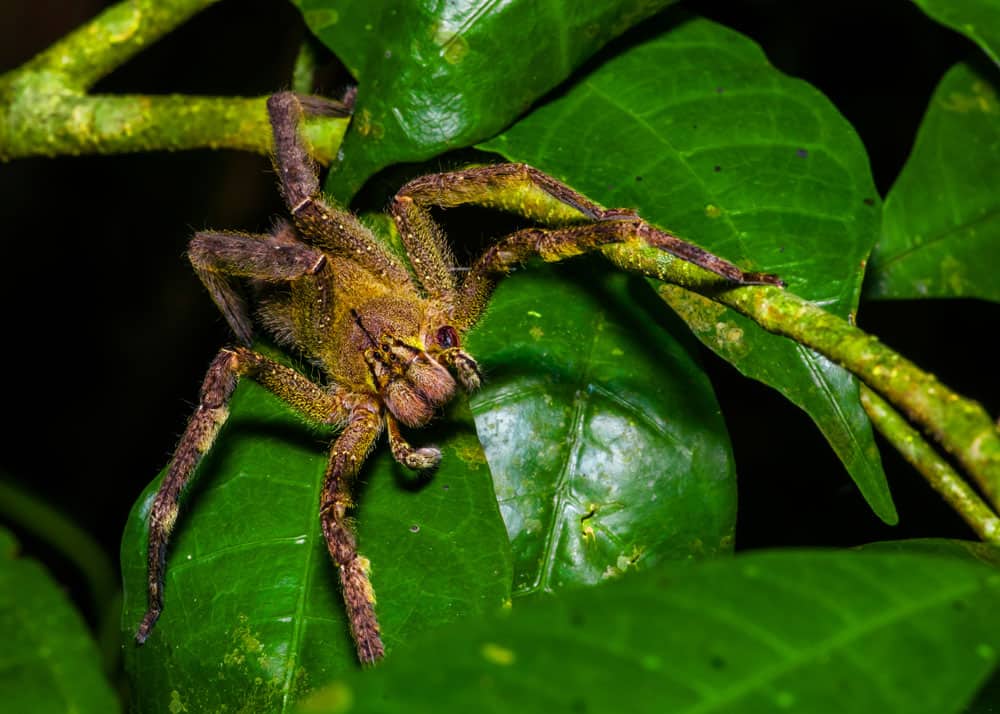 What does a Brazilian wandering spider banana spider look like? Phoneutria are large, brown and hairy spiders with long legs and are recognized by the patch of dense, fine hair on their pedipalps (pair of appendages adjacent to the chelicerae mouthparts)

Another genus of spiders commonly called banana spiders because they’re often discovered in banana shipments, Phoneutria spiders have much in common with Cupiennius. They hail from Central and South America, they’re large, hairy and brown, and they also hunt their prey at night instead of using webs. Plus, the species, Phoneutria fera, features bright red mouthparts like Cupiennius.

Aside from the similarities, it’s vitally important that you recognize the differences between these two spider types. Although incidents are rare, bites from Phoneutria can be dangerously toxic to humans and have been known to be fatal to young children.

Fortunately, there are a couple of ways to tell the difference between these two spider types.

For one, Phoneutria has patches of dense, fine hairs on its pedipalps, which are the two appendages beside the chelicerae mouthparts. If you don’t want to get that close to the spider, then take a look at the forelegs. Phoneutria forelegs often have a dark stripe on the front side and contrasting black and yellow/white bands on the underside. What is a banana spider?

Well, it might sound like it’s a spider that either eats bananas or looks like a banana, but a banana spider is actually the common name for various spiders found around the world.

Some are called such either because they feature yellow bodies or because they’re found living on banana plants and in shipments of imported bananas.

How many types of banana spiders are there?

There are at least five types of banana spiders which are discussed in this post.

There is also a goblin spider native to China that’s listed in the Bannana genus.

The banana spiders in this post all contain venom, but most of them are not harmful to humans except for redness and a stinging feeling at the bite location.

How deadly is a banana spider?

Only the Brazilian wandering spider is considered deadly, and that’s not all the time. Unfortunately, two children died from bites by the same spider in São Sebastião, Brazil. But some workers on banana plantations have reported only mild reactions after being bitten.

Experts believe this is because these spiders don’t always release their full venom at once but sometimes produce “dry bites.” Where do banana spiders live?

Different banana spiders live in different places around the world. The ones that are found in banana plants live in Central and South America. Some known as golden silk orb weavers live in warm regions like Asia, Africa, Australia and the Americas while others live in the islands of the Pacific Ocean.

Banana spiders may look frightening, but they’re usually shy and won’t bother you as long as you don’t bother them. If they feel threatened, they may bite out of defense.

Have you ever heard that monkeys peel bananas from the end opposite to the stem because they know that banana spiders live in the banana tips? It's a common myth that banana spiders lay their eggs in banana plant blossoms, and baby spiders can end up in your breakfast.

So, before you swear off eating bananas, rest assured that this myth is false. Banana spiders lay their eggs in the leaves of banana plants and not the banana blossoms which grow and change too quickly for a mother banana spider’s peace of mind. We hope that these banana spider facts have helped you learn more more about what banana spiders are and why they’re called such. Before this post, were you familiar with banana spiders? Did any of these facts surprise you? Let us know in the comments!